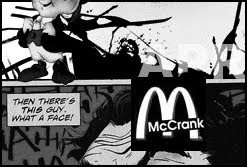 Running more and more behind on this thing. Perhaps it was a good idea to quit, while I was a head. This months list features a bunch of covers, including one from David Bowie and one from the famed Joy Division. Likewise, some new softies from Purity Ring and Dirty Beaches. You have those limited release albums right? Thanks to some steady airplay on SiriusXM and some smart word of mouth via the twitter-verse, these bands have caught my ear and attention. I've added in a few oldies and standby acts, like the indie-cred Titus Andronicus and the upstart band Yuck, both of which have been searing my ears! Great takes on some stale rock. Now that you know what I have been up to, what have you been up to? Bonaroo? Travelling Circus? Interested to hear what you think and that is grabbing your ears and ripping them off? I am off to Vegas shortly and thereafter parts unknown (okay Texas), so I will be grabbing some shows and meeting the people. Remember to kiss them for me!

How Am I Rankin"

These songs are availble online for a limited time before they are removed.

If you are an artist (or represent an artist) being featured on this site and want me to remove your song(s), send me an email and it (they) will be removed from immediately.

Support musicians and buy the albums, all of them!